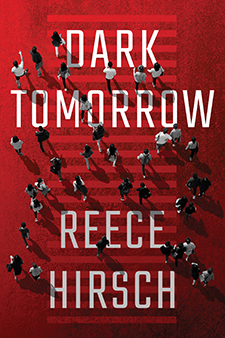 FBI special agent Lisa Tanchik is skilled at handling cyber threats, having recently taken down a Dark Web black market worth billions. But ruthless hacker NatalyaX always seems to be a step ahead.

The government calls on Tanchik's expertise when an email attachment causes a fatal seizure at US Cyber Command. But before she can get her feet under her, the entire East Coast goes dark. A sinister plan is unfolding before her eyes—and no one knows who's behind it.

Tanchik plunges into chaos to hunt down the true source of the attacks. Close dealings with shadowy figures both online and off expose her to extraordinary danger as the country teeters on the brink of catastrophe.

A soldier on the front line of a cyberwar, Tanchik must nullify the threat before it deals a death blow to America's institutions—and puts millions of lives in jeopardy.


"At the start of Hirsch's nail-biting sequel to 2019's Black Nowhere, FBI special agent Lisa Tanchik is called to a murder scene in Columbia, Md., that has the m.o. of NatalyaX, the hacker she has been tracking for a year. The action builds to a surprising twist ending. Chronically depressed and continually hung over, Lisa is a flawed heroine readers are sure to root for. Hopefully, she'll be back soon."
—Publishers Weekly

"This is cutting-edge, ripped-from-the-headlines entertainment extraordinaire. Superbly researched and masterfully executed, Dark Tomorrow will teach you things youâd much rather never have learned."
—Providence Journal

"This novel is eerily realistic to what is happening today. In many ways the gripping plot will cause readers to stop and think about many issues, including the need to be careful with their own privacy."
—Crimespree Magazine

"Taut, terrifying and intensely realistic—with an unstoppable race to the breathtaking finish! A compelling inside look into a world of cyberwar most of us can barely imagine—and the talented Reece Hirsch reveals harsh truths of the dark web that should haunt us all."
—Hank Phillippi Ryan, nationally best-selling author of The Murder List

"A fantastic edge-of-your-seat thrill ride that never lets up for a single page. Plus, a kickass heroine who's worth rooting for. This book has everything I want in a great thriller."
—Chad Zunker, author of An Equal Justice

"Hirsch imagines a frightening future in which cybercrime is rampant, and it takes the best and the brightest resources of the government to combat the enemy's relentless attacks. Dark Tomorrow is both terrifying and compulsively readable."
—Terry Shames, author of the Samuel Craddock series

"With Dark Tomorrow, Reece Hirsch raises the bar in this heart-pounding East vs. West techno-thriller. Tales of deadly toxins, cyber-hacking, and spy games fuel his master-class treatment of Agent Lisa Tanchik and her adversary NatalyaX, infusing their profound skillsets with unique flaws, rendering them deeply human. And in perhaps the deftest touch of all, Hirsch uses his backdrop of the Dark Web and deep fakes to highlight the horrors of modern life: that the thinnest of lines keeps our civilization from ruin."
—Joe Clifford, author of the Jay Porter series and The Lakehouse