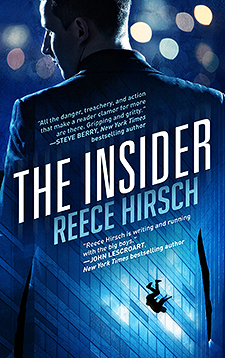 No matter how many times the police asked Will Connelly to recount the events of that morning, his story always began—and ended—with the same details. At six thirty a.m., he swiped his access card at the security desk in the lobby of his office building, then rode the elevator to the law firm's offices on the thirty-eighth floor. The hallways were empty, and he saw no signs that anyone had arrived at work yet. In his office, Will threw his suit jacket over the back of a chair, sat down at his desk, and began listening to the voice mails that had come in overnight from far-flung time zones.

Working on his first cup of coffee and first billable hour of the day, Will gazed out his window at San Francisco Bay, which was turning from black to Coke-bottle green as the sun rose through the mottled haze blanketing the Oakland Hills. The wind was already whipping up a light chop on the bay. There was a good chance that conditions would be right for windsurfing by late afternoon. Will had once been an avid windsurfer. He had even subscribed to a pager service that notified him when the conditions were right, but gave that up years ago. The beeping pager had only served to torment him while he was trapped in the office poring over contracts.

But he still kept a surf-shop sticker on the side of his computer monitor, the image of a great white cut through by a red line: No Sharks. An ironic motto for a guy striving to make partner in one of the world's largest law firms.

The phone on his desk rang, startlingly loud in the silent office. The Caller ID display flashed Ben Fisher, so he knew the call was coming from Ben's office one floor above him. Ben was a senior associate who was providing tax advice on a merger transaction that Will was running.

Will couldn't imagine what Ben might want from him at that hour, so he let the phone ring. He preferred to use these early-morning hours to work on projects that required some concentrated thought and a little quiet. Will needed every bit of concentration that he could muster because he was among the slate of proposed new partners that the executive committee of Reynolds, Fincher & McComb LLP was scheduled to vote on later that day. He had spent the past six years working toward the goal of partnership, and today his fate would be decided. It was more than a little distracting.

With his unlined face and longish brown hair, Will looked more like a law student dressed up for a job interview than someone on the verge of making partner. At thirty-two, he still didn't have the prematurely middle-aged look of many of his peers. In some quarters, looking like a kid was a disadvantage for an attorney, but Will's clients were mostly technology companies that seemed to like their lawyers young. Besides, it added to his reputation as a prodigy. He was two years younger than most of the other associates vying for partnership, a fact that could work against him when the partners' votes were counted.

The phone rang again, and once more the display showed that it was Ben Fisher. If it's important, Will thought, he'll leave me a voice mail. Anything Ben wanted to talk about could surely wait an hour or two. The phone stopped ringing, but Will continued staring at the console. Finally, the red message light blinked on. Will listened to Ben's message, which was nothing but dead air and the sound of breathing followed by a hang-up. If it didn't even merit a voice mail, then it really must not have been urgent.

Determined to find a quiet place to work and escape the phone, Will picked up a notepad and went down the hallway to the firm's law library to review some Delaware Chancery Court cases on fiduciary duty. Will doubted that Ben would find him there. In this age of online research, hardly anyone visited the law library.

He pulled a musty Delaware Reporter from the shelf and was halfway through Axelrod v. Titanium Investments when he heard a door slam on the other side of the floor. Will wasn't the only early riser today. Probably some first-year associate desperate to impress.

Will heard heavy footsteps, possibly more than one person. He tried craning his neck to peer down the hallway, but he didn't have the proper angle to see who it was.

A half hour later, Will went back to his office to locate some notes. After finding the notepad in one of the many piles of paper on the floor behind his desk, Will looked up and saw Ben Fisher.

He recognized Ben immediately by his lanky frame and close-cropped red hair. He even recognized the yellow striped tie that fluttered behind Ben like a cry for help.

The figure passed by the window so fast that he thought for a moment that he might have imagined it.

Will spun around reflexively in his desk chair, searching in vain for someone to confirm what he had just seen. Then he dashed out of the office, pausing only to fish the security card from his jacket pocket so that he could open the secure doors. Will ran through the empty lobby to the elevators. As the elevator descended, Will stared at the floor numbers as they ticked down like a launch sequence.

It didn't seem possible that Ben had committed suicide. After all, he was a tax attorney. Far too buttoned down for such a melodramatic gesture. On the other hand, it was difficult to erase the split-second image of Ben, like one of those Robert Longo paintings of men in business suits writhing in empty space, ripped out of context. The Falling Man.

But maybe he had not really seen Ben at all. Maybe his subconscious had taken a familiar image from that morning, prompted by the annoying phone calls, and slapped it on a bit of visual input that was otherwise incomprehensible. But even if it wasn't Ben, Will knew that he had seen someone falling past his window.

When he reached the lobby, a crowd had already gathered on the sidewalk around the splayed figure. His pants were shredded below the knee by fractured shinbones, which had torn through the fabric in sickening white and red. He must have hit the sidewalk feet first.

Ambulances arrived and the crowd was pushed back, widening the perimeter. A paramedic turned the body over, and before a blanket was drawn over the face, he saw smashed, bloodied features that were still recognizable. It was Ben.

The paramedic went through the motions of checking for a pulse. Heralded by the blurt of a siren, two uniformed policemen arrived.

Why aren't they taking away the body? Will thought. The paramedics and the police now seemed to be concentrating their energies on crowd control.

He heard people sobbing around him. A couple of secretaries from his firm were crying into their cell phones. Soon the crowd was filled with Reynolds Fincher attorneys and staff.

Someone touched him on the shoulder. "Are you okay?" Will snapped out of his daze to see Peggy Loo, who worked in the firm's Office Services department, standing next to him.

He then realized that three different people had asked him that question in the past ten minutes. Apparently, he looked like someone who was not okay.

Peggy nodded, a little uncertainly. "Did you know him very well?"

"Not really." Will knew only a few things about Ben, despite years of making small talk: he was single, a marathon runner, and a film buff.

"Why would he do this?" Peggy asked, as if she expected an answer.

"Just last week he told me that he was planning to run a marathon in Seattle. He was trying to break three hours," Will said.

Will put his arm around her as she sobbed. After a few minutes, a secretary who was one of Peggy's friends led her away, saying, "We should go. We need to go."

Will drew a little closer to the edge of the crowd around the body. Part of him wanted to run away from the crumpled man in the suit, from the bright red blood and the jagged shards of exposed bone. But he found himself staring nonetheless, trying to understand something that refused to be understood.

Then he saw it.

Next to Ben's bloodied right hand on the pavement lay a white plastic security access card for the office building. A cord woven with blue and green strands was threaded through a hole in the card. That was how Will knew that Ben had been holding Will's own access card. The blue and green cord had once held his name tag at a corporate law conference. The card was slightly warped—Will had once left it in a pants pocket and run it through a dryer.

Will had used the card that morning, swiping it on the pad at the front desk in the building's lobby. How could Ben have gotten it?

Then Will remembered that when he had gone to the library, he had left the card in the pocket of his suit jacket, hanging over a chair in his office. The blue and green cord had been dangling from the pocket.

As he stared at the access card, the full implications of what he was seeing came to him. Each access card was registered to an employee and created a record of where workers went in the building. Sooner or later, the police would figure out that Ben was using Will's access card as they attempted to track Ben's movements before his death. Will had clearly used that access card when he entered the building at six thirty—the guard at the front desk would verify that. Given those facts, anyone would assume that Will and Ben had met that morning in the office. If Will told the truth, that he had never seen Ben, no one would believe him. His story would seem even more implausible when the police learned that Ben had placed two calls to Will's office in the half hour before his death.

It dawned on Will that Ben's death might be a murder, not a suicide. Worse yet, someone seemed to be trying to cast suspicion on him.

As Will reached into his pants pocket, he already knew what he was going to find there. He removed the white plastic access card that he had used in his hurried exit from the building. There was no doubt in his mind that it had belonged to Ben Fisher.