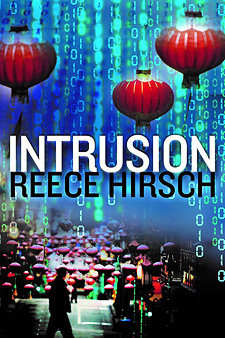 
When a powerful client summons him for a midnight meeting, lawyer Chris Bruen knows something is very wrong. Zapper, the world's most popular search engine, has been compromised and its most valuable asset—search algorithms—stolen. The company suspects that this most recent instance in a wave of high-tech crimes originated in China, and that the government itself is behind the systematic theft of US intellectual property.

Chris travels to China to search for evidence that will link the intrusion to the People's Liberation Army. With remote assistance from Zoey Doucet, the head of his firm's computer forensics lab and his maybe-girlfriend, Chris uncovers information that takes him even deeper into the shadowy world of cybercrime. Now he is trapped in a foreign land with a hard drive containing information that puts his life in jeopardy. In this secretive world of Big Data, Chris will risk everything to fight an elusive enemy as far-reaching as the Internet itself.

"With Intrusion, Reece Hirsch has written a timely and poignant thriller of international cyber spying while keeping the story a sweaty-palmed thrill ride. Hooked me from the beginning and I couldn't read fast enough to find out the ending. Fans of Joseph Finder and Christopher Reich, meet Reece Hirsch!"
—Robert Dugoni, New York Times bestselling author of My Sister's Grave

"Intrusion is the best cyber-security thriller I've read this year. Reece Hirsch really knows what he's talking about—and has a talent for making the pages fly. Anyone who's ever used a search engine will be fascinated by the international politics, rampant crime, and shocking intrigue that goes on behind their clicks. A must-read for thriller lovers!"
—Allison Leotta, author of A Good Killing

"The tension never lets up in this intelligent, high-stakes thriller involving the vast and dangerous network of China's professional, state-sponsored hackers. I couldn't put it down."
—Terry Shames, Macavity Award-winning author of Dead Broke in Jarrett Creek

"Intrusion is a cutting-edge, prescient thriller that draws the curtain back on the mysterious, little-understood world of data collection, data mining, and cybercrime. Reece Hirsch makes splendid use of his own background in cybersecurity in fashioning a riveting and masterfully constructed tale. The kind of rare thriller that will change the way you think about everyday life and things you normally take for granted. So read it with the lights on, before somebody turns them off from afar."
—Jon Land, USA Today bestselling author of Strong Darkness

"Intrusion is a terrific new cybercrime story that carries a warning for us all."
—Fresh Fiction

"A suspenseful and timely cybersecurity technothriller. Each Chris Bruen book is better than the last."
—Security technologist Bruce Shneier, Shneier on Security blog