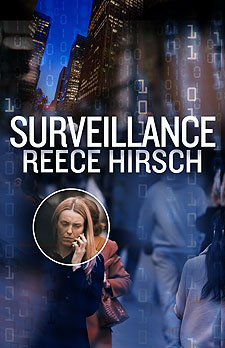 
When former computer-crimes prosecutor Chris Bruen and retired hacktivist Zoey Doucet open their San Francisco law firm, it's the best day of their professional lives. That is, until their first client walks through the door.

Ian Ayres is an "ethical hacker" who was hired by a company to test the security of its online systems. On the job, he uncovered some highly classified information: the existence of a top-secret government surveillance agency and its Skeleton Key, a program that can break any form of encryption. Now Ayres is on the run. And after government agents descend on Chris and Zoey's office during their potential client's visit—killing two employees—they, too, are forced to flee for their lives.

From California to Ecuador to Mexico, the trio must try to evade a hired assassin, a bloodthirsty drug cartel, and their own government. But how can they escape an adversary that can access every phone call, every email, every video feed?


"Wow. I read Surveillance in one fell swoop—absolutely riveting and compelling. It propels Reece Hirsch right to the A-list of the thriller game. Loved every line."
—Ken Bruen, author of The Guards

"Snap your cell phone's SIM card in half, stuff a copy of Surveillance into your bug-out bag, and make sure you're not followed to your off-grid cabin in the woods, because Reece Hirsch's latest Chris Bruen novel ratchets up the paranoia something fierce."
—Chris Holm, author of The Killing Kind

"On the bleeding edge of computing, Surveillance will have you looking over your shoulder and thinking twice before hitting send. A hell of a ride."
—Matthew FitzSimmons, author of The Short Drop

"Surveillance involves a dark and dangerous technology that resembles what Will Smith's character went up against in Enemy of the State with the feel of Robert Redford dashing between New York and Washington in Three Days of the Condor. Those are lofty comparisons, I know, but Hirsch more than measures up thanks to a pair of appealing heroes and the devilish conspiracy in which they find themselves embroiled. The classically structured Surveillance delivers on all its promises, relentlessly satisfying in all respects."
—Jon Land, Providence Journal

"Hirsch's first three books were brilliant and gripping. But Surveillance is his best so far. Hirsch has a gift for explaining the latest developments and challenges in the cyber world to the layman and marrying their implications with real world headlines while creating a thrilling fictional stew of high-tech crime and murder."
—Tallahassee Democrat

"While Surveillance does not lack for a heaping helping of high-tech gadgets and information, as well as globetrotting action—by the time all's said and done Bruen, Doucet and Reston have been as far-flung as California, Mexico, Ecuador and Russia—it's the way Hirsch brings moral questions into play that elevate Surveillance, and the entire Chris Bruen series, above the run-of-the-mill thriller."
—Book Reviews By Elizabeth A. White

"Hirsch keeps the pace moving quick and fluidly. Short chapters and high intensity suspense propel the plot ... And Hirsch also manages to sneak some wit into the dark depths of this technological thriller. The Amish way of life may look a little more appealing at the end of Surveillance. Stock up on the tinfoil, folks, the eyes and ears are everywhere."
—Jen Forbus, Jen's Book Thoughts