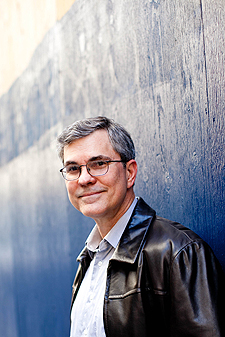 
Reece is the author of five thrillers that draw upon his background as a privacy attorney. Black Nowhere is the first in a new series featuring FBI Special Agent Lisa Tanchik, who investigates cybercrime. His first book, The Insider, was a finalist for the 2011 International Thriller Writers Award for Best First Novel. His next three books, The Adversary, Intrusion, and Surveillance, all feature former Department of Justice cybercrimes prosecutor Chris Bruen. Hirsch is a partner in the San Francisco office of an international law firm and cochair of its privacy and cybersecurity practice. He is also a member of the board of directors of the Valentino Achak Deng Foundation (www.valentinoachakdeng.org).

Reece has been listed in Chambers USA: America's Best Lawyers for Business since 2005. He earned his law degree from the University of Southern California and a B.S. degree in journalism from Northwestern University. Prior to law school, Reece worked as a journalist in Atlanta for several years, including a stint as an assistant editor of a business magazine. He also edited and published an arts and entertainment magazine in Atlanta.

Reece is a member of the Mystery Writers of America and the International Association of Thriller Writers, and has served as a member of the Board of Directors of the Northern California chapter of MWA.

Interview in The International Thriller Writers Association's The Big Thrill

Article for CrimeReads on the evolution of cyberthrillers


A: I think if my books have a theme, it's that statement that you find stenciled on rear-view mirrors—Objects Are Closer Than They Appear. Technology has connected people in so many positive ways, but there's a dark side to it, too. As our lives become more and more dependent on the Internet and smart phones, technology brings a lot of bad things right to our doorstep, from hackers and cybercriminals to government surveillance. I think it's a very modern sort of fear that, wherever you go, if you're connected, bad people have the ability to reach out and touch you—and not in a good way.
A: Lisa exemplifies a struggle that appears to be taking place within the FBI right now. She's whip-smart and tech-savvy, but not your typical Special Agent. She doesn't fit the physical prototype of someone who can meet the boot-camp demands of Quantico. She's also sarcastic, iconoclastic, and she's struggled with depression, which she has self-medicated with alcohol. Her sister died of an opioid overdose, so she has a very personal understanding of the damage done by the drug epidemic.

In its efforts to remake itself to combat cybercrime, there were some at the FBI who supported her and brought her along through the ranks because the Bureau needed her technical skills. But there are still old-school elements within the FBI that don't know what to do with someone like her. In BLACK NOWHERE, investigating the Dark Web marketplace known as Kyte, Lisa finally gets an opportunity to show what she can do, using her knowledge of the online underworld. It turns out that Special Agent Lisa Tanchik is a badass, just a different sort of badass than the FBI has seen before.


A: The character of Nate Fallon was inspired by the true story of Ross Ulbricht, the young man who founded the Dark Web marketplace Silk Road. When I read the reporting about Ulbricht, I could never quite understand how this smart, likeable, middle-class kid evolved into a criminal kingpin who allegedly ended up ordering hits to protect his empire. When I wrote the character of Nate Fallon, I was trying to get inside that type of person's head in a way that a journalist can't and show, step by step, how his initial idealism gave way to the darker aspects of his personality. While Nate is ultimately the villain of BLACK NOWHERE, there's good in him, too, even at the end of the story. I hope the reader has trouble making up their mind about Nate—I know I did.

The character of Nate also gave me an opportunity to explore the psychology of the founder of a fantastically successfully Silicon Valley start-up. In many ways, the arc of Nate's story resembles that of Steve Jobs and the other titans of the tech industry that he wants to emulate—with the key difference that Kyte happens to be a criminal enterprise.


A: My portrayal of the world of the Dark Web marketplace Kyte is fairly true-to-life. Anyone who downloads the Tor browser and searches the Dark Web will still find a host of sites selling illegal drugs that look very much like Kyte. To research the Dark Web, I read everything that I could find about Silk Road. I also downloaded the Tor browser myself, and did some exploring on the Dark Web, which can feel a little like swimming with the sharks.
A: I hope that BLACK NOWHERE gives readers a better understanding of the new front in the war on drugs, which is taking place online and involves Dark Web marketplaces like Kyte. When Nate launches Kyte, he is full of libertarian ideas about the merits of conducting an online marketplace that is free from government oversight or regulation, even if it involves the sale of illegal drugs. As the story progresses and the situation with Kyte devolves, I think the flaws in Nate's view of the world become apparent.
A: I'm nearly finished with a second Lisa Tanchik story. I don't want to say too much about it just yet, but it takes Lisa into a new and very dangerous world, and pits her against an adversary who is every bit as smart, skilled and determined as she is. One of the issues this book will explore is the point at which cybercrime becomes an act of cyber warfare against our nation. I can't wait to see what readers think about where the Lisa Tanchik series is headed.